Cognida is a Network as a Service (NaaS) platform designed for enterprise customers. NaaS businesses deliver network services such as protocols, router operations and firewalls and charge in exchange a subscription fee. In the case of Cognida the network service that they deliver is the management of blockchain platforms for enterprises. Cognida enables the enterprise customer to own, control and protect their data while they operate with a blockchain.

Windmill Enterprise is a Delaware C Corp that is behind Cognida. It is founded by the co-founders of Cognida and will develop the first Cognida enterprise application.

The official cognida.network website was released on June 13, 2018. Around the same time an updated version of the white paper was presented. In terms of social media, as of June 2018 their Telegram Group counts with several thousand members, while their subreddit has only 42 readers and seems to be inactive.

On June 19, 2018 a partnership with Rivetz, a decentralized mobile security solutions provider, was announced. The CEO of Rivetz is among the advisors of Cognida. A detailed timeline with developing milestones is not presented in the white paper.

The token issued by Cognida is called Cognida token (COG) and is an Ethereum ERC 20 token. The COG token is a service-backed token, that can be redeemed for services on the Cognida platform. The token value is based on the value provided to the platform’s customers. 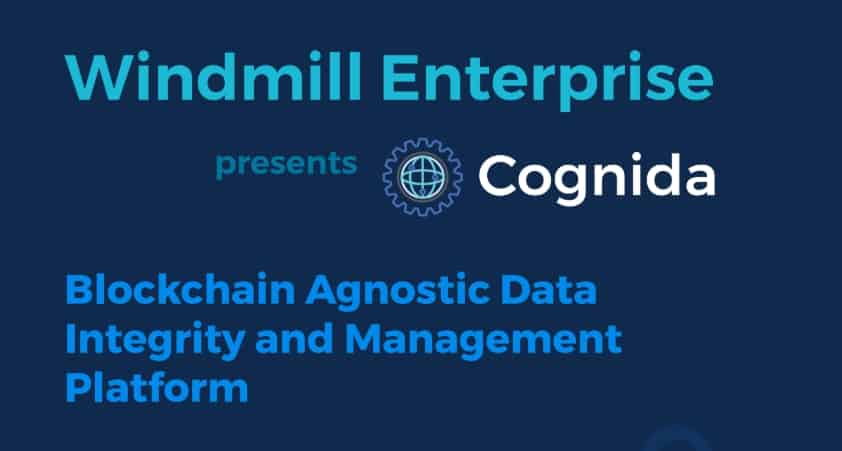 The Cognida team consists of two co-founders and an additional five members of the leadership team. On top the team counts with seven developers and system architects.

Michael Hathaway is co-founder and the CEO of Windmill Enterprise. He has decades of industry experience and founded Information Xchange, a company focused on the industrial use cases of the Internet of Things (IoT).

Bing Byington is a co-founder and the Executive Chairman of Windmill Enterprise. He is a serial entrepreneur with experience in the mobile wireless, digital imaging and healthcare sectors.

Among the advisors of Cognida are Dustin Byington, the CEO of Wanchain, Oliver Birch, the Vice President of Global Communications of Wanchain and Steve Sprague, the CEO and founder of Rivetz.

Cognida is designed as blockchain agnostic, in the sense that it allows its enterprise customers to use various blockchains. It provides a standardized security API for interaction with blockchains for purposes such as authentication, authorization, encryption, decryption and data integrity.

Services provided by the Cognida Network include trusted service relationships between enterprises and cloud services and the ability for system administrators to add devices to blockchain networks.

The distributed permissions technology applied by Cognida removes a single point of failure. This is because of the decentralized nature of blockchains that make them immutable.

The target customers of Cognida are enterprises which likely allocate substantial budgets for network services and are willing to pay a high price for the network services provided by Cognida.

Windmill Enterprise, the company that has very close ties to Cognida, may be able to acquire the first customers for the project. The team that is responsible for Cognida has already years of experience in telecom, software, systems integration and IoT.

The market niche that Cognida is targeting seems to be lucrative and there is at the same time only little competition from other blockchain projects.

Cognida’s concept and business model may be difficult to understand for the average ICO investor. People in general are more likely to invest in products that they understand. Complicated technical B2B business models, as it is the case of Cognida, are better suited for large Venture Capital investors.

Large enterprises, which are the potential customer group of Cognida, are often slow to adopt new technologies and may be hesitant before trusting blockchain based solutions. Cognida may have a hard time getting users to adopt its platform.

Despite a large team of developers, the existing team is not yet experienced with developing blockchain technology.

The founder team is significantly older and more experienced than the average ICO team. On top the team is supported by well known industry advisors.

If the project can succeed at creating a demanded platform at the intersection between centralized legacy systems and decentralized blockchains then there is a good chance for securing this market since there is not yet a lot of competition in the field.