Crypto Prices Rally Across the Board

The prices of most digital currencies and tokens have rallied strongly over the last two days. The recent lows were reached on Friday last week, but the rally gathered momentum on Monday and continued throughout Tuesday. While the rally was spurred on by several positive new stories, the market was heavily oversold, and it was only a matter of time before we were going to see a strong move to the upside. 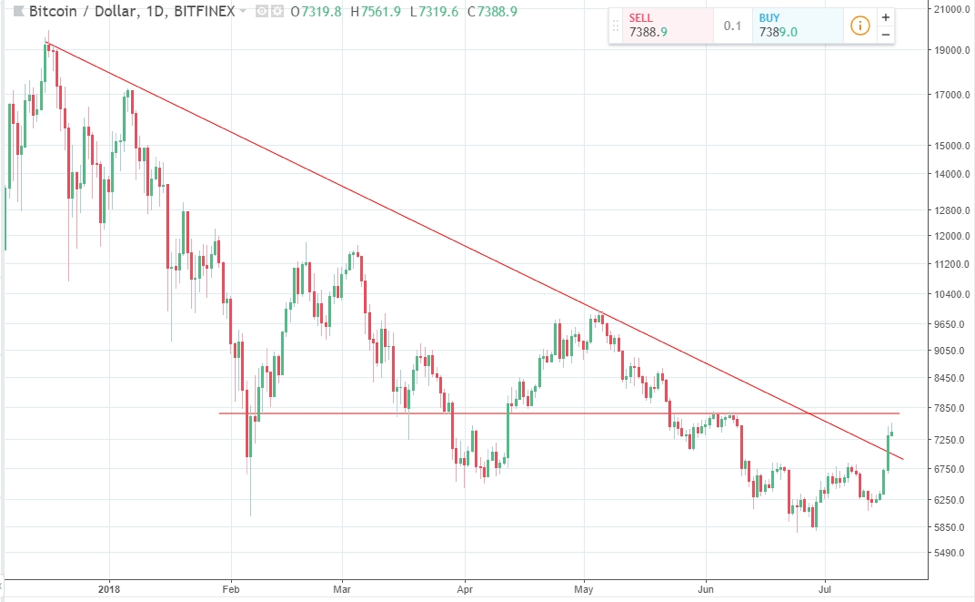 The price of Bitcoin has already broken one important resistance level at $7,050, -the next will be at $7,764. Friday’s low was significant because it was a higher low, the first we have seen since April. It’s too early to say the trend has turned, but a higher low and the break of the downsloping trendline are steps in the right direction.

Confirmation of the new trend will come when we see the trend break retested, followed by a continuation of the rally.

IBM has announced that it is experimenting with a stablecoin to incorporate in its payment solutions. The company has been working on several projects using Stellar, a blockchain designed to facilitate payment solutions. However, the volatility of most cryptocurrencies creates challenges and the cost of trading fiat into a cryptocurrency and then back into fiat is another hurdle.

Stablecoins have attracted growing interest during 2018 due to volatility and the bear market occurring in most crypto assets. The fact that a multinational corporate is now looking at stablecoins is likely to create even more hype around these coins.

Kik has released the beta version of its Kinit App in the Google Playstore. Kik is attempting to create an ecosystem of mini economies, all fueled by Kin tokens.

The project is aiming to drive adoption by making the app easy to use and fun. Users earn Kin when they signup, and every day that they return to the platform.

Kin tokens can currently be exchanged for gift cards, and new products and services will be added over time.

Kik raised $100 million during its ICO in September last year. Initially built on the Ethereum blockchain, the company soon realized scalability would be a problem, and is now building its own blockchain. The project is one of the first ICOs to aggressively target the mass market with an App, and will be an interesting one to watch. If the strategy pays off, we will no doubt see a lot of other ICOs following a similar strategy to build a user base.

Over the last few days, there have been more signs than ever that cryptocurrencies and blockchain technology are being taken seriously by the mainstream economy:

The CFA institute announced that it will now be incorporating a section on cryptocurrencies in its curriculum. The CFA charter is the gold standard amongst investment professionals, and the inclusion of crypto assets is a sign that the institute now sees them as a viable asset class.

IBM and Columbia University have announced that they will be jointly starting a blockchain research centre. The Columbia-IBM Center for Blockchain and Data Transparency will leverage Columbia’s resources to develop blockchain technology.

And, finally, Hong Kong’s central bank has announced that it will be launching a blockchain trade finance platform in an effort to fight fraud. The platform will be developed along with 21 prominent banks.